A Contemporary Church with a Traditional Service 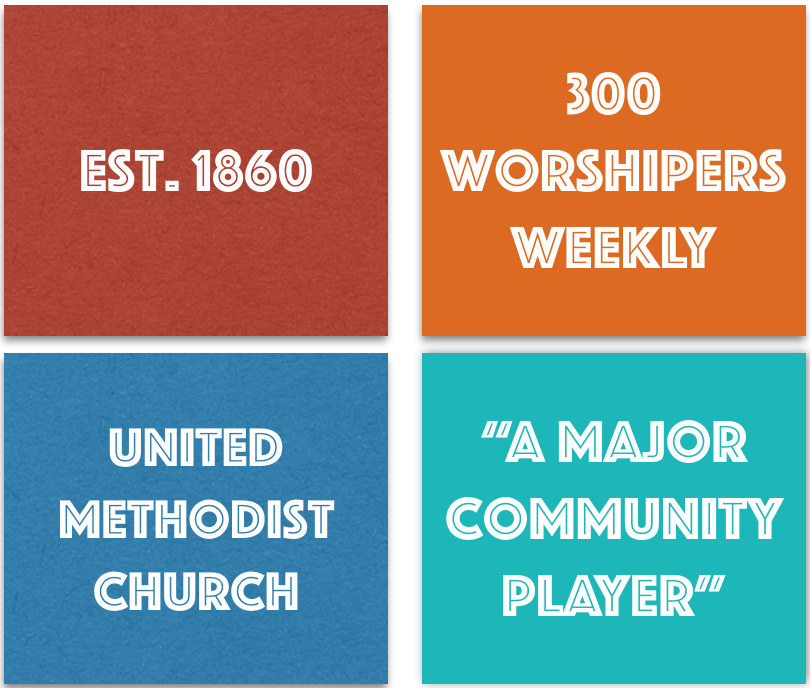 But the thing that stands out about this church is not its age or its community involvement, but its dedication to be a church for the congregation. When it comes to their worship services, there is nothing in place simply because that is the way its always been done. Their worship is diverse because they build the experience around the ideas of those in the congregation. They hear the things people have to say, they answer their questions and include new types of music and new songs all because they listen. Their services are based on the people in the seats and in the pews, they look at the culture people are living in, and speak truth into that context. As a result, Wheatland Salem is a

A church that listens and cares for its congregation.

For further specific information about Wheatland Salem, feel free to explore the tabs below!

At the core of who we are is a simple yet audacious mission to love God, love others, and change the world. It’s the reason we exist. The purpose at the center of everything we do.

We believe that we accomplish this mission by each one of us doing our best to live a devoted, connected, and generous life following Jesus Christ.

We develop a devoted life through a personal relationship with Jesus Christ. This relationship is strengthened through weekly worship within community, as well as through the daily practice of prayer, Scripture reading and reflection, and application to life.

We develop a connected life through building intentional relationships with one another that are authentic and encouraging. We experience these relationships through our variety of small groups: community, growth, recovery, and ministry.

We develop a generous life through offering ourselves and our resources to further Jesus’ mission in our community and world. This offering involves sharing our faith with others as well as sharing our time, talent, and treasure in specific serving opportunities within and beyond Wheatland Salem.

Vibrant, corporate worship is the center of our life together.

The Christian faith grows best when experienced in community of authentic relationships with Christ and one another.

The Christian way is always anchored in Jesus’ call to repent and believe in him.

The primary method for reaching others with the gospel of Jesus Christ is through the intergenerational relationships of children, youth, and families.

Extending the impact of the gospel comes through reaching across local and global boundaries.

“In 1852 (or earlier) pioneer families began holding church services in the Copenhagen school house and the David Brown home. In 1860 they built a church. Also in 1860, another church – the Wheatland Church was organized and they put up a building in 1870. Work continued there until 1895 when the congregation passed out of existence. In April of 1907, the Copenhagen Society sent a petition to the Illinois Conference Session requesting the Association to grant the Society the privilege of using the two old churches – Wheatland and Copenhagen – in building a new structure, one and one-half miles south of Copenhagen, on the corner of Rt. 59 and 95th Street, thus uniting the two societies into one, Wheatland Salem. Then in 2011 we opened a new campus in Oswego so that we could accomplish our mission of reaching more people for Christ.”-This excerpt is from the Wheatland Salem website, and can be found here

The 8:30am service is traditional, and takes place in the sanctuary.

The 10:00am service is contemporary and takes place in the community room.

Every service hands out the same bulletin, which includes announcements and information about the community. To see an example of this bulletin, click here.

Wheatland Salem’s sanctuary is small but incredibly beautiful. Like many sanctuaries, its rows of chairs leading up to an altar, its choir and candles and organ, all things you would expect to find. But tucked away behind the altar is a prayer chapel. While not used during the traditional service, its presence added something to the experience. The ceiling above it lined with flags is a reminder of the church’s connection to other nations. In the corner of the room, they have a prayer banner, where you can go after the service for prayer.

The part of the congregation that attends the traditional service represents 1/3 of the overall congregation of the church. This group is mainly older adults. In fact, during the observation process, I was the youngest in the room.

This group is very participatory during worship. They clearly know all of the songs and liturgy, and are very familiar with the order of service.

Worship is entirely directed by the pastor and the lyrics/liturgy on the two tv screens in the front of the room. The music is led by an organ, all hymns from the United Methodist Hymnal.

The sermons at Wheatland Salem are the same across both types of worship. They follow the Sermon Series approach. During the time of observation, their sermon series was “I have a Question,” addressing difficult questions (such as “how do I reconcile christianity and science?”) composed by members of the congregation.

The order of the service follows the traditional sequence:

Unlike the traditional service, the contemporary service meets in the Community Room, which is a gym-turned worship center space. With rows of seats, all surrounding a stage, its certainly what you would expect of a contemporary worship space.

This service is much fuller than the traditional one, and has a mixture of all ages within the congregation. For a church of smaller size, this service is also surprisingly diverse, with Hispanics, Asians, Asian-Indians, and African Americans in attendance. Besides Calvary, it has the most diverse worship attendance that I’ve observed.

Despite the larger numbers, however, this congregation seems less participatory and more reserved.

This service is certainly more upbeat. With less liturgy and lead by a worship band complete with guitars, drums, keys, and vocalists, they play modern worship songs such Open up the Heavens.

The sermon is the same as that of the traditional service.

Wheatland Salem hopes to be a contribution to the story of God working in your own life.

According to their Worship Director, Wheatland Salem has been a “major community player its entire life.” Their main point of outreach is the resources they bring with their building. There is never a time both during the week and on the weekend that the church isn’t being used for either church or community events. Numerous groups, including multiple boy scout and girl scout troops, music groups, and recovery groups, meet inside on a weekly basis. There are also two different schools that use the building full time. Through these interactions with the community, Wheatland Salem has established itself as a prominent force serving in Naperville.

Additionally, they participate in service projects on a local, national, and global scale.

In Naperville, they do monthly work with Hesed House, service projects where they go rebuild local schools and neighborhoods, and numerous projects with CCC.

Nationally, they send groups of middle and high school students on mission trips to different communities in need.

Globally, they annually serve at 4 different mission locations across the world and support about a dozen missionaries.