Above anything else, Community Christian is a church for the community. 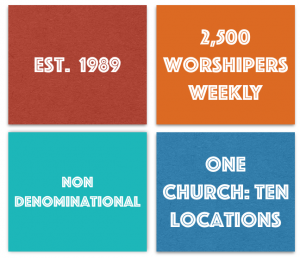 While the video above discusses the expansion vision of the church from 2014, it also shows what Yellowbox is all about. It is not an overlook of the church by any means, so continue reading for further clarification.

Arguably the most modern of all of the churches in this project, Community Christian is a thriving church that has made a giant impact in Chicago area. With ten different locations across Chicagoland, they have revolutionized what it means to be one church with multiple campuses. Planting churches in many different types of neighborhoods throughout Chicago and its suburbs, they are focused on creating unique individual locations that reflect the culture of their surrounding neighborhoods, while still steeped in the things that make Community Christian thrive. No matter what location you go to, their hope is that you would walk in and know that you were in a Community Christian church.

For the sake of the project, this page focuses specifically on the Naperville Yellow Box campus. Being the original campus, Yellow Box is at the very heart of the church as a whole. What began as a group of people meeting in Naperville North High School 30 years ago has grown into one of the largest churches within the city of Naperville. Everything they do has the community in mind.

From the outside, the church looks modern and untraditional. Indeed, much of what they do goes beyond the expectations put on any given church. With their modern structuring and refreshing take on worship, they strive to be:

For further specific information about Yellow Box, feel free to explore the tabs below!

Helping people find their way back to God by utilizing the three R’s:

At Community there are three key relationships that help you develop a growing
relationship with Jesus:

While the number of services and service times vary from location to location, each service is the same in style and in teaching. At the Naperville Yellow Box location, there are three different service times:

Attendance at each service time varies, with the Sunday morning times ultimately being more popular. Despite the busy schedules citizens of Naperville typically face, Sunday morning is still the popular day and time to attend church. However, the Sunday night service is typically frequented by college students and young adults and has a unique energy of its own.

The Worship Space and Bulletin

At Yellow Box you will find a lively worship atmosphere. Walking into their black-box auditorium, you are met with rows of theater-like seating that surround an open stage. While you can’t move the chairs the space could easily be used for many different types of events. If you climb the steps at the back of the room you will be taken to their Skybox which serves as a meeting space with tables and chairs. Its unique to see such a versatile balcony space still included in the auditorium, as people can choose to sit up there rather than in the theater seats.

Like many churches, Yellow Box hands out a weekly bulletin, complete with announcements, visitor information and response card, and space for sermon notes. To see what the weekly bulletin looks like, click here.

With lights and fog, Community Christian fits what many would describe as contemporary worship. Their band plays contemporary music from bands such as Bethel Music and Hillsong United. The band is primarily lead by one singer, who encourages people to engage in the worship service. Check out their music in the “Original Music” tab!

Something that makes this church super unique is the sermon writing process. While there are different pastors preaching at all ten locations across the Chicago suburbs, every message is virtually the same. Now, this doesn’t mean that the pastors are not personalizing and changing specific lines, but the overall outline of each sermon is written by a teaching team rather than individual pastors. As a result, the messages of the church are not the voice of individual pastors, but the voice of the community. Furthermore, by taking the enormous responsibility of writing sermons week after week off of the pastors’ shoulders, location pastors spend much more time out in the community building relationships with people in and out of the church.

Overall, you will find that the sermons are written in practical ways that allows you to walk away with concrete ways to be disciples of Christ.

Communion is a weekly occurrence at Community Christian. Everyone is invited to the table, and it is taken by intinction (taking bread and dipping it into wine or grape juice). The pastors are very intentional about the language they use when explaining the eucharist:

The offering occurs at the very end of the service with the announcements, and both happen simultaneously. This is different as most churches place announcements near the beginning of the worship service. Interestingly, this leaves worshipers empowered to participate in the community of the church. As Pastor Ian Simkins put it, “worship is the pushing point to equip people to live life together.”

Community Christian crafts their worship services around the weekly “Big Ideas”, hoping to equip people to be disciples of Christ. However, Executive Pastor Doug Leddon also stated that they desire to foster deeper relationships with God, hope among all people, and a stronger sense of community.

To get a taste of the music of Community Christian, check original music from their worship band on Spotify!

Community Christian’s heart for church planting doesn’t stop at their ten locations! New Thing is their official church planting ministry that plants both nationally and internationally. Through this ministry, Community is raising new leaders in the church to equip and disciple people world wide!

Emphasizing Community in the Community

Community Christian Church is a church of community. Their heart beats to rhythm of the people within it. While the worship of the community is important, Pastor Ian Simkins emphasizes that they “don’t just offer small groups, [they] are rooted in small groups. The connections between each and every person are what drive them forward. That is why the pastors are focusing on the community. In being relational pastors they are doing what some may call the impossible in a church this large.

In addition to of all of the amazing things the church is doing on the inside, they are also working to make a difference on the outside. Their goal? To be an Impact Church. To be involved in the community in such a way that they would be missed by Naperville if they suddenly disappeared. This involvement comes in many different forms, including:

This work in the Naperville community has certainly been noticed, as it seems that they are one of the most frequent churches to appear in Google when searching for churches in Naperville.

If we want to be a church that isn’t just interested in growing the attendance of our building, but actually caring for our community, then we have to be willing to carve out time to sit with teachers, to sit with policemen, to talk to the firefighters and to let them know that we’re here for them in whatever they need, that we care about the same city together.-Community Pastor Ian Simkins

So many different community events have been hosted in Community Christian’s auditorium! To learn a bit about what this looks like, check out the News Report from Naperville TV Station below!

In order to be relevant with both society and Naperville as whole, Community Christian will sometimes use their worship services as time to engage in conversations about issues in the community and the country as a whole. They do this, however, without politicizing such topics. This includes racism, the LGBTQ community, and immigration. On one occasion, in response to both national and local tragedy, they even had a time for prayers of lament during their worship service.

Living in the Community

During a conversation with Community Pastor Ian Simkins, he emphasized how important it is for the pastors of the church to actually live in the town in which the church resides:

It’s important that to some degree pastors live with and in the context that they are pastoring and living life with. That’s how the culture of Naperville bleeds into how we’re writing songs, organizing services, and what we’re talking about in messages. It is easy in church work to be only concerned with church work, but to actively break out of the stream, to walk up the down escalator every once in a while, to just engage with the community, to sometimes have our offices in local coffee shops, to support a local band at a bar or run in a local 5k, to be apart of the community of Naperville, that is how the DNA of Naperville as a whole gets imprinted on us. It makes us better pastors because we are living in he community our congregation lives in.

An Ecumenical Movement in the Community