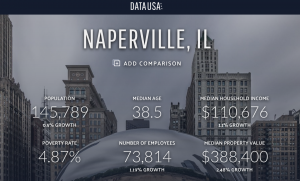 In many ways, the demographics of Naperville reveal much what you’d expect: a wealthy, predominantly white suburb. But there are a few things that may surprise you. Thanks to DATA USA, you will be able to see the overall makeup of the population though various graphs and charts, and I will discuss how the data in these charts are reflected in churches across the city.

As shown in the chart above, the average household income in Naperville is over $110,000 a year. But this number greatly varies by geographical location. The chart below shows the average income based on the geographical area in which citizens live.

How does the economy affect churches in the area?

Larger churches often have more resources, with giving members that have larger incomes. In earlier times when people would simply flock to the churches in their neighborhoods, the second chart could have been an indication of the wealth of churches in those neighborhoods. However, today, income is simply a factor in the population’s diversity that pastors across the city of Naperville have to be mindful of.

How does the occupational makeup affect churches?

A large percentage of people in Naperville work in the business world, a fact that greatly impacts the mindset behind the people who makeup the church. As it is, many churches assume the business-structure model. In addition, you will see the educator-influence in the children’s and student ministries as educators become directors or volunteers.

How does diversity makeup affect churches?

While the majority of churches in Naperville are made up of solely white congregants, some churches are more diverse than others. The large presence of Asians in the population (which is, in part, due to the quality of the public school system) has caused many Korean and Chinese churches to pop up in the area. In response to the climbing population of Asian-Indians, Calvary church has established an Indian Church. Simply because whites are the majority doesn’t mean that other ethnicities don’t have an impact on the culture of churches throughout the city.